Proud to be part of the Elevate Multi Academy Trust

Knayton are proud to be part of the educational vision for Elevate Multi Academy Trust, whilst retaining our own strong identity.  The Trustees have allowed its Academies to retain the same composition for their local governing bodies, which is set out below.

The three core functions of the local governing board are:

Knayton C of E Academy’s Governing Body strives to support, challenge, and empower the leadership team so that the Academy’s vision for its staff and children is achieved.

Jo is a parent to 2 children who attend Knayton.  Her background is in animal nutrition; however, Jo currently works at home on the family farm and campsite with her husband.  Jo joined the governing body to give something back to the Academy which has allowed her children to flourish and thrive.  During her term Jo has served as a link governor for science, data review and french and one of the things she most enjoys is meeting up with like-minded people to ensure that through reviewing and monitoring, that Knayton continues to offer outstanding teaching to all its children.

Rachael has been part of the Knayton family since 2013 where she started my teaching career as a student and then did not leave! There is something truly special about Knayton Academy which she wanted to be a part of.  Rachael was appointed as Head of School in 2018 alongside the Executive Headteacher Nikkie Beniams. Rachael loves being part of a forward thinking, passionate governing body who support and challenge Knayotn. The Academy continues to grow and develop through their hard work and commitment.

Linda is currently work at York St John University in Initial Teacher Education and am the subject lead for primary mathematics as well as working more broadly on wider curriculum programmes and current educational research. She has always been involved in education working both abroad and closer to home; ranging from teaching English as a foreign language in the Czech Republic to being an Advance Skills Teacher in a number of primary school across England (including Newcastle, the London Borough of Merton and York). Having been a Primary Mathematics Consultant working with a broad range of schools across North Yorkshire, Linda was delighted to be asked to join the governing body at Knayton C of E Academy. She is a parent of two children who are lucky enough to attend Knayton C of E Academy and she hopes, through her work as a parent governor, to support the Academy in achieving the very best for all the children in our care.

Elizabeth is a parent to 1 child who currently attends Knayton and was a Knayton pupil herself in the 90's. Having recently relocated back to North Yorkshire after 12 years in London. Elizabeth's professional background is in marketing and event management. She currently works from home as an event consultant and producer. However, Elizabeth is often found at venues and locations across the UK and Europe. She joined the governing body to actively represent both the Academy's children and parents.

Ben has been part of Knayton C of E Academy since June 2016, teaching upper Key Stage 2 (Years 5/6).  Currently, he leads on Maths and Data at Knayton as well as supporting other schools with the development of their maths curriculum, as part of his role as a Specialist Leader in Education (SLE).  Ben feels very privileged to work at Knayton, as its vision and ethos matches his own for what a child's education should be.  The idea of building relationships with children to get the absolute best out of them, while using a creative, challenging and innovative curriculum model, means these children will achieve great things and experience an inspiring school life. 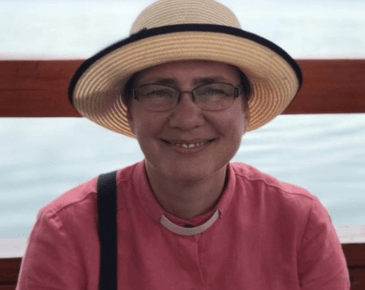 Dianne is a the priest-in-charge of the Hillside group of churches and a Foundation Governor at Knayton C of E Academy.  She was licensed to these churches at the beginning of 2019 having completed curacy in a neighbouring group of churches.  Before moving into ministry, Dianne worked in museum education for York Museums Trust, where she spent 18 years at the National Railway Museum delivering workshops for schools.  Nearly all her adult life has been spent working with children and young people both at work and in church. Outside of her official role, Dianne likes to read and drive steam locomotives.

Appointed as a Foundation Governor in 2020, Jean is very pleased to have this opportunity to support Knayton Academy. She has enjoyed listening to reading, and taking part in assemblies as a member of the ‘Open the Book’ team since she moved into the area four years ago. Jean is a member of the Parish Church Council of St Mary’s Church, Leake. She spent a rewarding and fulfilling career teaching History and General Studies in secondary schools and managed these departments for many years. Subsequently she taught English for Speakers of Other Languages in adult community classes. Now retired, Jean undertakes voluntary work with NYCC Youth Justice Service and enjoys walking, reading, travel and contributing to church and community life.

Together, the Governors are responsible for:

There are several different types of Governor:

Appointed by members of the Governing Body. They are intended to be representative of the local community and may add particular kinds of expertise.

The local vicar is normally appointed as the 'ex-officio' foundation governor;

The other foundation governor will usually be appointed by York Diocese, following consultation with the local PCC.

Anthony Davison has not attended for over 6 months

We use necessary cookies to make our site work. We'd also like to set optional analytics cookies to help us improve it. We won't set optional cookies unless you enable them. Using this tool will set a cookie on your device to remember your preferences.

Necessary cookies enable core functionality such as security, network management, and accessibility. You may disable these by changing your browser settings, but this may affect how the website functions.